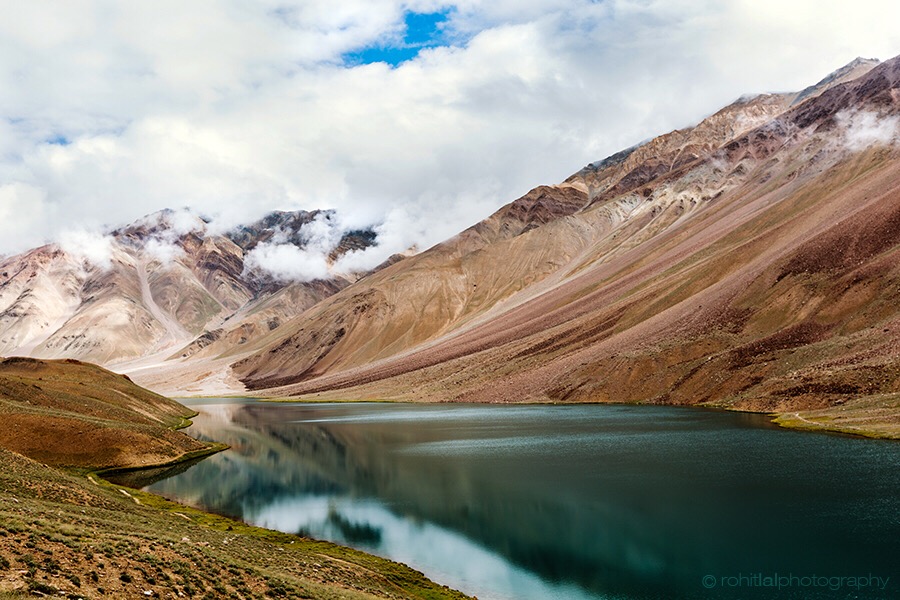 Introduction :
The Chandratal Lake or known as Lake of the Moon is situated in the Lahul and Spiti district in the state of Himachal Pradesh in India. It is a cresent shaped lake tucked between the Rohtang and Kunzum passes of the Himalyas and is the source of water for the Chandra river. The Chandratal Lake sits at an elevation of 4300 metres with mountains of scree overlooking the lake on one side while a magnificent cirque presents a view from the other side. It is a popular destination for trekkers as well as campers with the vast meadows on the banks of the lake.

Sunset at the Chandratal Lake

The trekking route to the lake
Image attribution to Anks @ Flickr

History :
According to Hindu mythology from the Mahabharat, it is said that the Pandavas made their ascent to heaven from the shores of this lake and to be here is to be truly blessed. The lake also serves as a halting place centuries ago for traders who went to Spiti and the Kullu valley and attracts a large number of adventure lovers from Tibet and Ladakh.

A closer look at the lake
Image attribution to vijaykarthik @ Flickr

Prayer flags around the lake
Image attribution to vijaykarthik @ Flickr

Getting there :
The Bhuntar Airport used to be the nearest airport to the Chandratal but was suspended due to its high altitude single runway which proved to be too dangerous. The recommended airport would be the Shimla Airport located in Jabarhatti followed by a 6 hour journey to the Kunzum Pass from Shimla. Trekking is required to reach the Chandratal Lake and takes around 6 km from the Kunzum Pass. As the average altitude is over 4000 metres, it is strongly advised for visitors to do a checkup with doctors before embarking on this adventure!